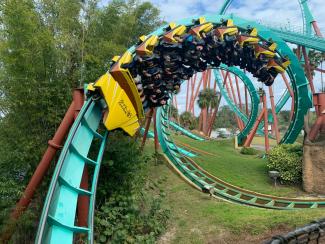 For our final entry for 2014, I wanted to do a traditional look back at the year and see if there were any lessons to be applied to 2015.  Some of you may have had your seatbelt strapped tight in 2014, while others may be the thrill seeking types.  Either way, the year turned out to be a year where the phrase “never saw that coming” was uttered by the talking heads as well as individual investors a lot.

Let us start our ride on the roller coaster called the Seasonal Approach.  The first climb up, January, says “As January Goes, So Goes the Year”.  This year, from day one, stocks were down, and the month finished down 3.6% as measured by the S&P 500.  While the rule would indicate a down year, it has been anything but, as the S&P since Jan 31 is up over 15% (thru 11/30).

Our ride now goes excitingly down a big hill and careens thru a number of s curves, until we hit the “Sell in May and Go Away” seasonal rule.  I am not sure anyone actually sells out their whole portfolio and sits on the sidelines until the end of October, but the media does tend to hype this rule as a grounded strategy.  The fact is that in 2014 the S&P 500 was up approximately 7% during the time in question (May1-Oct31).

Our ride finishes with “the Santa Clause Rally” implying that the joy of the holiday season drives individuals to buy stocks.  Maybe the tendency for a good end of year rally is that portfolio managers want better year ending results.  While the 2014 final numbers are not in yet, the recent market drop does set up for a potential “Santa Clause Rally”.

The challenge with the Seasonal Roller Coaster is that it is not economically based.  Let’s take a brief look at another investment philosophy: the Economic Prediction basis.  What were some of general economic expectations for 2014?

Investing for the future does not equal trading for the day. Each of the 2 strategies (and they are very different but legitimate strategies) carries different risks, expectations and of course results.  The problem is when the lines between the two become blurred.

This year, 2014, has seen more volatility than in the past several years.  Stress levels go up, irrational responses increase and worst case scenarios are projected onto life goals (in a negative way.)  We teach our clients to stay calm, stay with the plan and remember that investing is a long term commitment with small battles along the way.  Unexpected market gyrations have happened before, and will happen again.  It is the essence of the roller coaster ride. Additionally for 2015, we should note that the third year of a presidential term is usually the most positive of all 4 years.

May your 2015 year be one of happiness and success.  Remember that true wealth is not measured by numbers on a piece of paper but the experiences that your have, and the lives that you touch.

The Standard & Poor’s 500 Index is a capitalization weighted index of 500 stocks designed to measure performance of the broad domestic economy through changes in the aggregate market value of 500 stocks representing all major industries. The S&P 500 is an unmanaged index which cannot be invested into directly. Past performance is no guarantee of future results. There is no assurance any strategy will be successful. This is not a recommendation to buy or sell any investment